Ontario hunter/jumper breeder grows her own hay and finds Haygain valuable for maximizing the harvest and having on hand for allergic emergencies.

It's often a problem that leads horse owners to Haygain Steamed Hay: a respiratory issue in their horse or a scarcity of good hay in their area. Neither were the case for Fieldstone Farm in Hockley Valley, Ontario, where owner Shannon Smith breeds a small number of top-quality horses for the hunter/jumper market.
None of their broodmares or youngsters had any signs of respiratory struggles and they grow their own hay on site: a blend of alfalfa, Timothy and orchard. 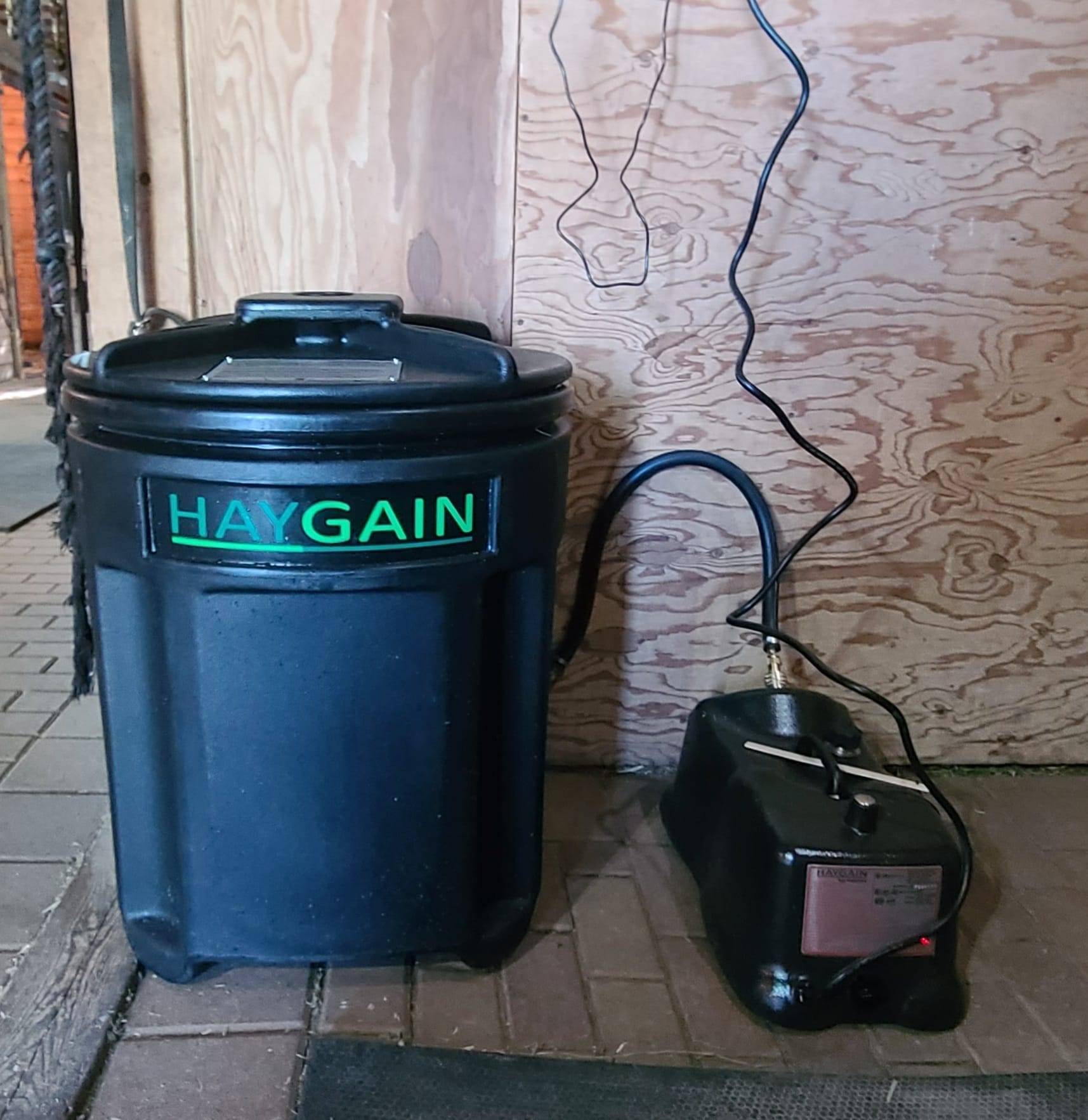 "As a breeder, we do every single thing we can to make sure our horses have the best foundation," Shannon explains. "Every single thing that goes into their bodies has to be top notch."
While Fieldstone had no health problems prompting their interest in a Haygain High Temperature Hay Steamer, Shannon knows that preventing them is key to raising healthy horses. Even with homegrown hay, storing the harvest subjects it to the stable environment's inevitable dust.
"It doesn't matter where you store your hay or for how long, it's going to accumulate some dust -- even on a small operation like ours," Shannon explains. With that comes the risk of dust getting inhaled and irritating the respiratory system. Plus, the longer the hay is stored, the more it loses palatability, moisture and its soft texture.

Fieldstone's horses spend at least eight hours a day outside, much of the year enjoying fresh pasture grass. By comparison, the end of the previous season's harvest lost some of its appeal to her horses.

Shannon counted on Haygain's High Temperature Steaming to remove up to 99% of the dust and other respirable particles from hay and to restore its fresh taste and palatability. Her horses proved her right. "I wanted to make use of all that harvest's hay and, when I steamed it, our horses were happy to consume it. They inhaled it!

"All the horses ate it," she continues. "A few times we put some fresh steamed flakes out for lunch and they came running for it."

Along with ensuring that all harvested hay will be happily consumed by her horses, the Haygain Hay Steamer came in handy when a friend's boarded broodmare presented with a severe allergy to ragweed. The pollen-laden weed is "everywhere in August," including growing outside the Fieldstone pasture fences.

Standing by the pregnant mare's stall one night, Shannon noticed her breathing was a bit labored and her nostrils were flaring slightly. She called the vet with added observations of elevated respiratory and heart rate. These are all classic signs of an allergic reaction, the vet said. A call to the mare's previous owner revealed she had a history of ragweed allergies.

Inhaled bronchodilators were prescribed and will be continued for several weeks. The vet also suggested soaking the mare's hay to remove additional irritants from her compromised respiratory system. "I can do better than that," Shannon said, referring to Steamed Hay. "Our vet confirmed that was a perfect addition to the inhaler treatments."

Like Shannon's own horses, the friend's mare is happily chowing down the steamed hay, ensuring that she and her baby-on-the-way get the nutrients they need. "She enjoys the Steamed Hay so much and it's so easy to do," Shannon reports.

As a preventative measure or an important tool when respiratory issues or allergies arise, the Haygain Hay Steamer has earned its place in Fieldstone Farm's meticulous horse management routine.