Rodolpho Riskalla: Adaptability As a Superpower

Tokyo Para Silver Medalist steams ahead to an even bigger goal.

Targeting Olympic Dressage and Paralympic Para Dressage for 2024 in Paris is a goal of gargantuan proportions. It would take an equally huge heart and Rodolpho Riskalla has that. The world’s current #1 ranked Grade IV Para Rider and Tokyo Individual Silver Medalist, Rodolpho represents his native Brazil, considers Paris his adopted home and currently lives and trains in Germany.

As an inspiration, he’s gone global.

Rodolpho grew up under the tutelage of his mother, Rosengele Riskalla, a judge, coach and matriarch of “the first family of dressage,” as Eurodressage.com put it. He and his sister Victoria excelled on the Brazilian Youth circuits and trained and competed at top levels in Europe. Rodolpho went on to develop and campaign horses up through Grand Prix level success. Rosengele and Victoria have helped Rodolpho and his horses throughout a Para Dressage odyssey born of a 2015 health crisis and compounded by COVID these last few years. With Tokyo in the taillights, Victoria is resuming her own competitive career. 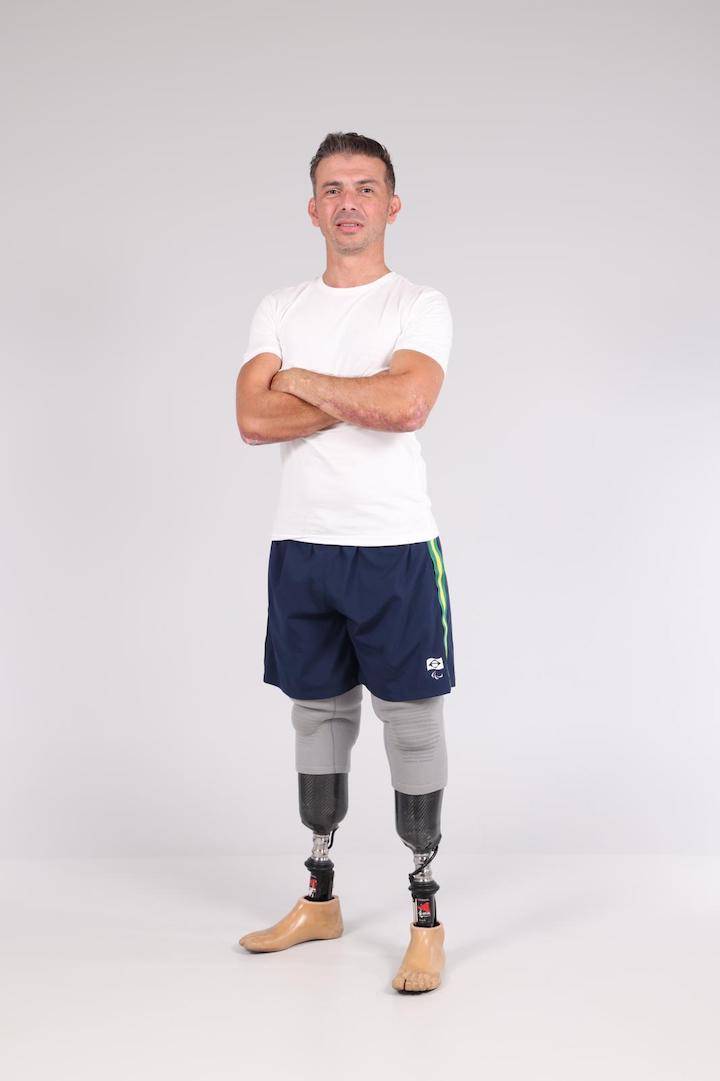 Competing in both Dressage and Para Dressage presents tough tests to horse and rider, Rodolpho explains. But they pale in comparison to what he’s overcome since contracting bacterial meningitis in 2015. He’d travelled home to Sao Paolo hoping for time with his ill father, who passed on before Rodolpho could get there. Tending to family matters in the aftermath, Rodolpho was hit out of the blue.

One morning, the healthy, fit, then-31-year-old woke up feeling fine and did normal activities. That night, he felt flu-ish and had a high fever. The next morning, Rodolpho’s mother checked him into hospital and, a few days later, doctors induced a coma that lasted nearly three weeks. The comatose state enabled his heart and respiratory system to keep going as other parts of his body shut down. His extremities were hardest hit as blood stopped flowing to them.

Miraculously, Rodolpho survived, but all the fingers of his right hand had to be amputated, along with two on his left. Once stabilized, Rodolpho had to decide between having his feet amputated or hoping that several more surgeries and months in the hospital might save them. He opted for the amputations.

In the years preceding his illness, Rodolpho had horses realistically progressing toward consideration for the Rio Olympics in 2016. Shortly before he got sick, however, he’d stepped back from competition to focus on his career as an event manager for the Dior fashion house. He kept working with his horses for pleasure.

Lying in his hospital bed, however, fierce competitive fires sparked anew. Pictures of his horses beckoned from the walls of his recovery room. Early in his rehabilitation, he asked to be hoisted into the saddle during an unapproved visit to the barn. He didn’t have prosthetics yet, but he “realized I could manage,” he told Eurodressage.com. 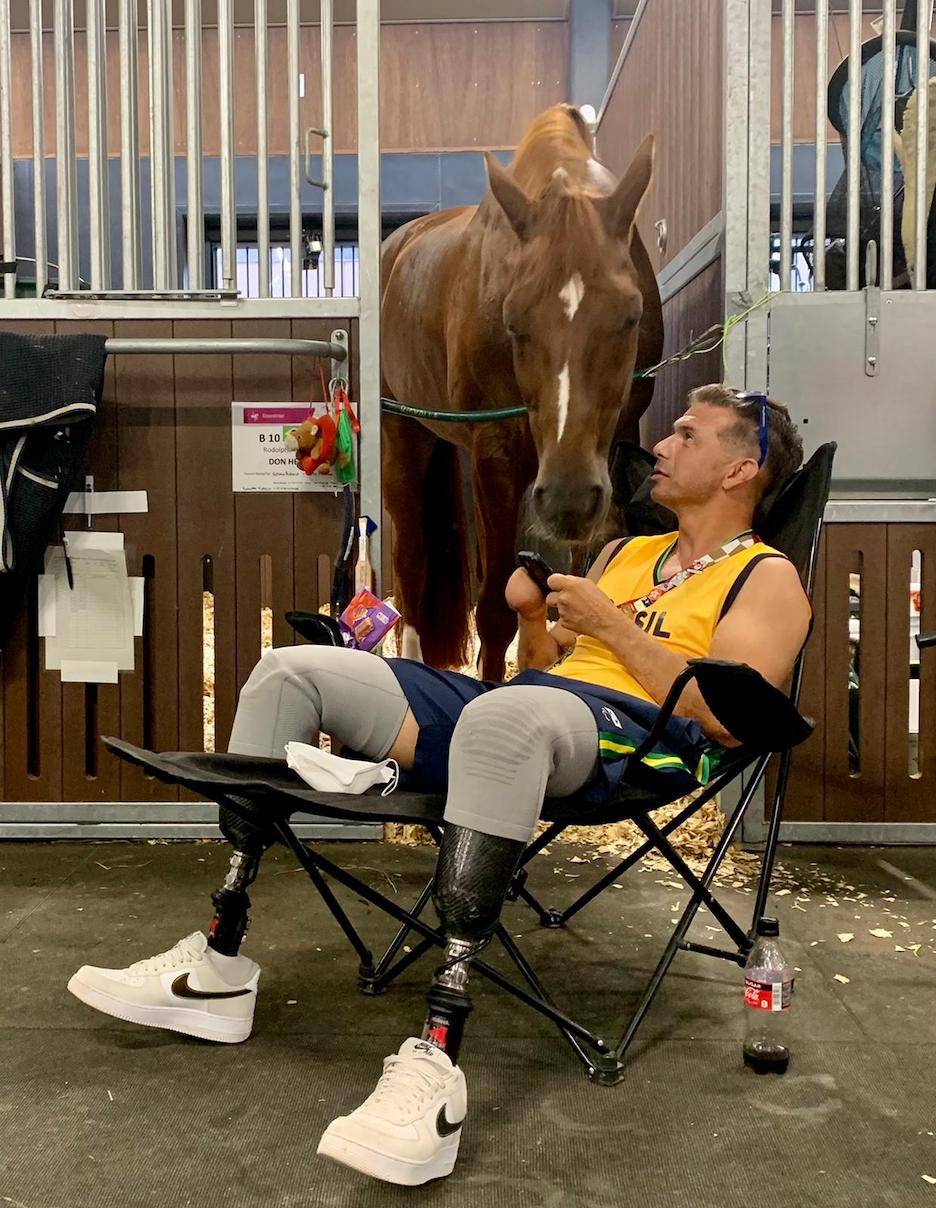 And that’s when Rodolpho embraced what has become his superpower: adaptability. The 2016 Summer Paralympics were coming to his home country of Brazil. “Why not?” Rodolpho asked himself.
By the time he was released from rehab in May of 2016, he’d already competed in two Para Dressage competitions on a horse borrowed from a friend. At that September’s Paralympics, Rodolpho and Warenne earned individual 10th in Rio de Janeiro. Nothing summarizes that part of his journey better than the “Against All Odds” award accepted with an earth-moving speech at the FEI presentation.
From there, Rodolpho continued to refine his Para Dressage performances and move back into able-bodied Dressage at the Small Tour level, both with Don Henrico.

The gorgeous sorrel stallion is owned by 1988 German Team Gold Medalist Ann Kathrin Linsenhoff and came Rodolpho’s way in 2017. In 2018, the pair earned double silver at the 2018 World Equestrian Games Para Dressage in America and they have continued to excel in both Para Dressage and Dressage arenas. With a new mare, Die Witte, Rodolpho contended the Small Tour division at the Aachen CDIO this past September, earning solid scores despite the mare’s newness to the renowned venue’s electrified atmosphere.

Talent and development-wise, Die Witte and Don Henrico’s brother, Don Frederic, are on track to be contenders for Paris 2024, in both Dressage and Para Dressage. Both are owned by his friend and fellow Brazilian Tania Loeb Wald, who just recently passed away. While mourning the loss of his close friend, Rodolpho notes that he’s not sure whether he’ll be able to keep campaigning these horses.

At a fully fit and sound 19, Rodolpho’s Tokyo partner Don Henrico is aiming at the World Championships in Denmark in August of 2022.

Rodolpho knew that Don Henrico had cough-producing allergies when the Donnerhall grandson came to him in Paris. Low-dust bedding and watered-down hay had kept it under control until then. Happily, the Paris stable made its Haygain High Temperature Hay Steamer available to Rodolpho. That was a relief for several reasons.

“First, it is much easier for us to prepare. Our horses eat three times a day and having to put that hay in water, wash the hay, then make the water go away is quite a process. Then, in the summertime, if the watered hay is left out in the sun, it’s not good. It ferments and grows bacteria, so it was all a little bit complicated to figure out with the grooms. Don Henrico would eat the watered hay in the beginning, but if it sat around for a few hours, he wouldn’t eat it anymore.

“Don Henrico eats everything that comes out of the Haygain,” the rider continues. “It is essential for our life.”

As COVID-19 lockdowns intensified in Paris, Rodolpho and his horses relocated to Hagen, Germany, where he works with top dressage trainer Holga Finken at Sudenhof. Rodolpho continued his work handling logistics for tours and exhibits of Dior’s art collection and his mother and sister accompanied him to help with the preparation for the Tokyo Paralympics.

An immediate issue was continuing with High Temperature Steamed Hay at the new location in Germany and Haygain was happy to help. The patented Haygain steaming process reduces up to 99% of the respirable irritants and allergens found even in hay of good nutrient content. Rodolpho’s full-bale HG 2000 Hay Steamer enables his three horses, and a few others, to enjoy and benefit from the clean, healthy forage. However, its substantial size and power requirements did not comply with regulations for equipment in Tokyo.

Enter Brazilian show jumper Marlon Zanotelli and his brother and yard manager Mario Zanotelli. They had taken their smaller, easily portable Haygain to Tokyo for use by the whole Brazilian Olympic team and arranged for it to remain in Tokyo for Rodolpho during the Paralympics.

The Logistics of Going Forward

Tokyo travel and horse care logistics were complicated for all, but not much of an issue for Rodolpho. Along with his work moving valuable art around the world for Dior, he navigates the complexities of competing in both Para Dressage and Dressage. The first step is declaring that intention with the International Equestrian Federation and requesting dispensations to use adaptive equipment in dressage. In Rodolpho’s case that incudes reins with loops that go round his wrists, stirrup magnets to help secure his boots and use of a whip, which is not normally allowed in Grand Prix dressage. Carrying a dressage whip compensates for limited use of his legs.

Along with working full time and keeping three horses in form, Rodolpho is happily sharing his story through speaking engagements. “Even if I can just say a small thing that touches somebody in their everyday life, I am happy,” he says in a “Going Forward” video produced by Dior. Even right after his illness, he has wasted zero time wishing it all hadn’t happened. In many ways, “It has made me who I am.”

He says that excelling in Para Dressage has improved his horses. The movements are less technically difficult for the horse, but the precision, suppleness and fluidity required for high scores require strict embodiment of dressage’s founding principles.

Even with feet and fingers, excellence in equestrian sport is always the result of unflagging dedication and extremely hard work, over many years. The Tokyo silver and the recently revealed plan to pursue an ambitious double play in Paris have intensified the spotlight on Rodolpho. He most appreciates that the focus has been not on what he’s lost, but on what he and his horses have accomplished in both Para Dressage and able-bodied Dressage. “That is personally a big deal for me.”

To target continued success on both sports’ biggest stage in 2024 is a big deal, indeed. Haygain is honoured to support Rodolpho and his horses in that pursuit.